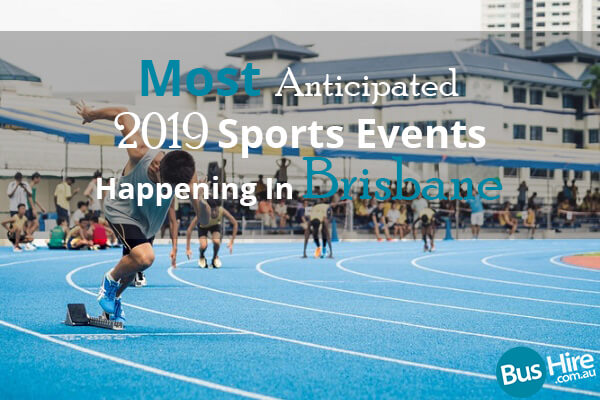 Using bus hire in Brisbane assures you a stress-free ride without being delayed because of not being able to find local streets and locations. If you are new to Brisbane, why not leave the driving to someone else? Especially because you don’t want to miss the beginning of a sport event for which you’ve planned, travelled, and anticipated for some time. Here are some sporting events taking place in Brisbane and surrounding areas. They range from world-wide participation to local favourites, but all are worth viewing.

Wherever it takes place, however, it has a test in each major city, it is widely attended and watched, and it has taken the nation by storm. National heroes are created here, made from both teams and individuals, each with their own talents and stories.

If you are not a cricket fan, even with the unique storyline associated with each Test, you may not find it as enthralling and as exciting as will a cricket aficionado. Then again, no matter what sporting event people attend, if they are not interested in it, they are likely to be bored. But if cricket is your passion, don’t miss The Ashes when it comes to Australia.

Get ready for the ride of your life from March 28 through April 14 when the best cycling Festival in Brisbane rolls into town. There is mass participation by everyone from amateurs to professionals. It’s easy to get psyched up at this most celebrated Brisbane venue.

An energetic party atmosphere is combined with elite track cycling during this six-day international series final, featuring the world’s best track cyclists. Residents and visitors to Australia can still enjoy this year’s world-class major event in the area’s most popular cycling city, if they hurry.

Taking place from May 9 through the 12th in Milton (in the Brisbane area), round nine of the Magic Round will take place. Featuring 16 clubs, a partnership between the Brisbane City Council and the Queensland Government has devised this concept. This family-friendly event is perfect for rugby fans young, old, and in between.

Held on June 2, in Brisbane City, this event is where Australia really kicks it up a notch. If you’re looking for an event in which to run (or would like to come cheer on other marathon lovers and participants), look no further than the famous riverside streets hosting the McDonald’s Brisbane Marathon Festival. Every state of Australia is represented here with participants from all over Australia joining with runners from over 35 countries. In all of Australia, this is one of the fastest-growing marathons offering a personal experience for both runners and non-runners alike.

This event occurs every year, this year spanning June 1 through the 14th. About 41 miles south-southeast of Brisbane, or 66 km, in the state of Queensland, the coastal city of Gold Coast hosts this festival of bowls. From all over the world, and, of course, Australia, over 2000 bowlers are expected to attend. No fewer than 15 Clubs host this 14-day action-packed extravaganza. Prize money paid out among 13 disciplines and 780 placings, is expected to be around AUD 250,000, making this the richest bowl event of the world. (Not to mention, the world’s biggest bowl festival.)

People from around the world may not flock to this event, but it is a local favourite, nonetheless. Held at Metricon Stadium for QClash, on April 27, the Brisbane Lions take on the SUNS at 1:45 PM. But don’t wait until then to show up! The kid’s zone, complete with inflatable’s, and other pre-game entertainment will be in abundance. Shuttles are among the free public forms of transportation from the Boowaggan Road Park-And-Ride, Nerang Station, and Broadbeach South Station. This is a one-day event, so don’t miss the action!

It’s time for some fun in the sun! From March 30 to April 7, this event starts at 8 AM daily and breaks down as follows:

Some 314 surf clubs are represented at this annual event with ocean events totalling over 400. Comparable to the Commonwealth Games, it is the largest event of its kind. Those amazing volunteers who keep Australia’s beaches safe will compete in surfboard rowing, sprinting, ski and board paddling, swimming, and the ever-spectacular Ironwoman and Ironman events. This week-long entertainment is appropriate for the entire family and is a great way to enjoy some beachfront, quality time.

And now for something a little more out of the ordinary, it’s time to discover your inner daredevil with Balmoral Skatepark’s Revolutions, held from March 5 forward, on a weekly basis. Booking is essential and, as long as you’re over three years old, you can join in the fun. This is the perfect opportunity to learn skateboarding techniques, make friends, learn new tricks, improve your skills, or just figure out the basics.

It may not be the biggest sporting venue of the year, but it’s nice for both visitors and local, and fun for all.

As suggested earlier, you don’t want to be late for the big sporting events. And driving around in a strange place can be confusing, stressful, and end up in frustration. For that reason, and more, make sure to utilize Brisbane bus hire for your transportation needs. Leave the driving to the professionals while you enjoy the scenery and the atmosphere.