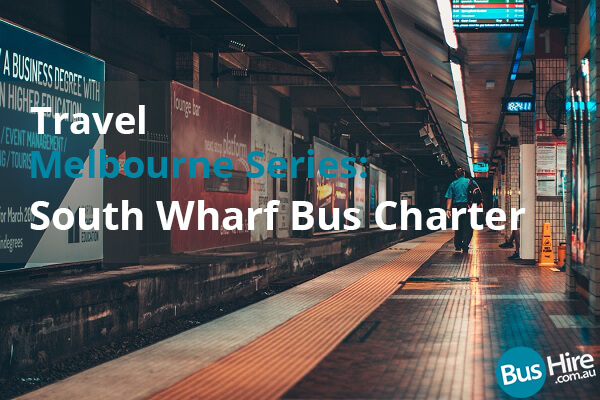 Melbourne is home to plenty of events and attractions, with the South Wharf being one of the key highlights. If you are looking to explore this suburb, there is no better option than choosing South Wharf bus charter. It provides the most affordable and convenient way of commuting when you have a sizeable travel group.

South Wharf is an inner south-western suburb in Melbourne, with the local government areas being the Cities of Port Philip and Melbourne. It borders Port Melbourne Railway line to the east, Wurundjeri Way to the west, and Yarra River to the north. The area was originally a part of Southbank’s industrial precinct, and it was renamed as a part of urban renewal strategy to link Melbourne Docklands and Southbank. It is home to some of the major landmarks, museums, apartments, luxury hotels and shopping outlets. Let us check out some of the other top attractions.

The Polly Woodside was launched in the year 1885 in Belfast, and at that time, it sailed roughly 1.5 million km across the globe. Situated in the heart of South Wharf region, this masterpiece is one of the most iconic attractions in Melbourne which reminds of the country’s rich maritime history. The ship has been named after William J. Woodside, who was the man behind designing a ship that was meant to be operated economically. Built in the last days of sail, Polly Woodside is typical of thousands of smaller iron barques, meant for deep water trading across the world.

During the mid-20th century when it was rapidly disappearing from Australian ports, a number of efforts were made to preserve the sailing heritage of the country. Today, this captivating tall ship provides an interactive experience for all, with an exciting program of events and an engaging gallery. You can take a guided ship tour, watch an interested short film about life on board the ship and view artefacts in the award winning interactive gallery.

This iconic trail links some of the best sporting, entertainment, cultural and recreational opportunities that the city has got to offer. With its starting point at the hub of Southbank, it winds along the banks of Yarra River past the MCG, Royal Botanic Gardens and Victorian Arts Centre. Other key highlights include Yarra Bend Park with its boathouses, bushland and golf course, and then you have the Dights Falls, Burnley Gardens and the Herring Island Environmental Sculpture Park.

Following the route of old Inner Circle Railway, the trail passes through Royal Park, which is home to the world renowned Melbourne Zoo. This is followed by heading back to the amazing new Docklands precinct along the Moonee Ponds Creek, past the Melbourne Exhibition Centre and Polly Woodside Maritime Museum. Make the most of your trailing by allowing sufficient time to take a halt at some of your favourite destinations along the way.

Perched on the southern banks of the Yarra River, Crown Melbourne is an entertainment hub of the city. If offers an exceptional blend of non-stop excitement, warm service and luxury, with more than 18 million visitors crowding this place every year. Apart from 3 world-class hotels with their own sophisticated and vibrant setting, the Crown is home to one of the largest casinos in all of Southern hemisphere. You have the award winning, stylish Crown Promenade, the modern indulgence, Crown Metropol and the benchmark for luxury hotels, Crown Towers.

You should definitely not miss out on a show at the stunningly black marbled Atrium of the Crown. With it vibrant music and special lighting effects, this globally renowned crystal ceiling comes to life, and is sure to tickle your fancy. Free attractions such as Chinese New Year and Christmas Spectacular thrill audiences throughout the year. Along with a couple of nightclubs and a live entertainment theatre, there are over 40 restaurants, bars, cafes, interactive amusement arcade and Kingpin.

DFO South Wharf is certainly the place to be, if you are a shopping fanatic. There are more than 170 national and international brands with a number of outlets offering amazing discounts on some high-end collection. You will be amazed with the atmosphere of this place, with a wide selection of local to retail centres that aim to enrich the shopping experience for every individual. It’s a place to get together, have fun shopping, while enjoying entertainment and lifestyle. Conclude your day with an amazing dining experience at one of the many bars, restaurants and cafes along South Wharf Promenade.

Designed by Architects Denton Corker Marshall and Melbourne artist, Robert Owen, the Webb Bridge crossing Yarra River was built with drums, fishing traps and fishing baskets in mind. The lower Yarra River on both the North and South banks continue to be developed, reinvigorating this part of the city. There are new spaces for public to enjoy, with the bridge allowing users to appreciate the panoramic views and plentiful activities, and can be used as a meeting point or a spot of leisurely contemplation.

The Melbourne Convention and Exhibition Centre

Informally known as the ‘Jeff’s shed’, named after Jeff Kennett, the Melbourne Exhibition Centre was opened in the year 1996. With a capacity to host thousands of major exhibitions throughout the year, the centre is one of the largest in southern hemisphere and the second largest in Australia. This masterpiece is yet another marvel by the architectural firm, Denton Corker Marshal, responsible for some of the notable buildings in Melbourne through the early 1990s, featuring their typical ‘blade’ entrance. The convention and exhibition centres were separate until a covered footbridge was erected in 1998.

Attending an event at MCEC is a different experience, as their main objective is to take inspiration from the culinary, creative and cultural delights of the city and offer expertise, innovation and inspiration to create unforgettable experiences for the general public.

If you are travelling in a group to any of the above destinations, we recommend you to book bus charter in South Wharf. Talk to us and find out more today!