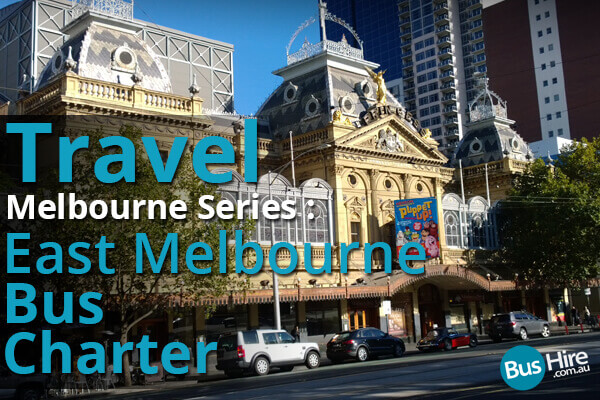 At Bus Hire, we focus on offering comfortable means of transport with our bus charter in East Melbourne. If you are looking to discover the eastern section of this wonderful city, we have wide ranging options for you, ideal for groups of all sizes.

Located 2km east of Melbourne CBD, East Melbourne is an inner suburban region in the city, situated between Richmond and CBD. It is bounded by Brunton Avenue, Punt Road, Victoria Parade and Spring Street. East Melbourne has been home to many important religious, health and government institutions, including the offices of Government of Victoria in the Cathedral and Parliamentary precincts, along with the Parliament of Victoria. The iconic cricket stadium, MCG or Melbourne Cricket Ground is also located in East Melbourne at the Yarra Park. It has been a prosperous community ever since it was established, and it houses some of the oldest terrace houses, gardens, parks and Victorian homes in Melbourne.

One of the most popular tourist destinations in the country, Cooks’ Cottage is certainly the oldest building in Australia that was built way back in 1755. Parents of Captain James Cook initially built the cottage in Yorkshire, England, and it was moved to Melbourne in 1934 by Sir Russell Grimwade. Bricks were numbered, packed and shipped to Australia. It is a fascinating walk down the memory lane with volunteers dressed in 18th century apparels, a delightful cottage garden, century-old antiques, coupled with the rich history of cottage’s evolution. A complete fact sheet is available to help you in self-guiding your tour.

The Cathedral Church of Saint Patrick

Popular by the name of St Patrick’s Cathedral, this cathedral church of the Roman Catholic Archdiocese is constructed on a conventional east-western axis. The distinction of minor basilica and the title was conferred by Pope Paul VI in 1974.At the east end of it is the altar, signifying faith in the resurrection.  The Latin Cross comprises of sacristies, a sanctuary with 7 chapels, transept with side aisles and a nave with side aisles. It is known to be the largest and also the tallest church in Australia.

Once housing the Treasury Department of Victoria Government, The Old Treasury Building currently operates as a museum in Melbourne. Known to be one of the finest Renaissance Revival Buildings in Australia, the Old Treasury Building was built between the years 1858-1862. Funds accumulated from the famous Gold Rush was used to build this structure in palazzo form. JJ Clark was a young architect behind the design, with the oldest script for the building dating back to the year 1857. Many of his drafts are still put on display across the building. He was also involved in designing another quintessential of classical style, with the Brisbane Treasury in Queensland. No doubt, it is the finest building structure you will see down under!

Johnston Collection is home to decorative and fine art in Eastern Melbourne, with the complex incorporating the reference library, gallery, Fairhall and the house museum. As a result of an inheritance by the late William Robert Johnston, the WR Johnston Trust was established in the year 1986. He was a prominent antiques dealer of the 20th century and collector of Louis XV, Regency and Georgian furniture, paintings ranging from 16-19th centuries, along with eighteenth and nineteenth century porcelain.

It was in the year 1990, when the collection was opened to public as a part of Melbourne International Arts Festival, which was then known as Spoleto Festival. It currently operates as a non-proft museum. Presently, the collection houses more than 1200 objects, playing host to customary exhibitions and rearrangements. Three tours are conducted every day on weekdays, organised by volunteer guide.

Featuring regular events and exhibitions throughout the year, the Tasma Terrace is the headquarter of the National Trust. Established in the year 1879, it is a fine example of a 19th century 3-storey terrace house in the country. It was originally built as a family home and a stylish guest house for an affluent grain merchant George Nipper. Thanks to the advocacy of the National Trust, the building was saved during the demolition of old structures to build towers in 1970. The terrace house currently incorporates meeting rooms, period decorated rooms, a gallery space and Victorian offices of the National Trust. It also available on hire for meetings, functions and conferences.

Known to be the only museum devoted to horse racing in the country, the Australian Racing Heritage was built under the benefaction of HRH Queen Elizabeth II, in the year 1974.The extensive collection of the museum depicts the rich history of racing through a collection of memorabilia, ephemera, riding gear, equipment, artwork, photographs, colours, and trophies. With an active program of loans, acquisitions and donations, the collection keeps growing continually.

The MCG or the Melbourne Cricket Ground is a cricket stadium located in Yarra Park, being home to the Melbourne Cricket Club. It is the largest cricket ground in the world by capacity, with the tallest light towers you won’t find anywhere else. Built in the year 1853, the ground is within a walking distance from the city centre. The venue is famous for its vital role played in the development of cricket. The first ever test match and ODI was played at this very ground, with the annual Boxing Day Test being one of the most popular events in MCG’s calendar.  It is also the spiritual home of Australian football.

A trip to East Melbourne is worth the time, effort and money, and one should definitely explore this place with their family or a group of friends. East Melbourne makes your commute easier with convenient options to suit groups of all sizes, with top class amenities and a licensed driver to take you through. We offer affordable service at the most competitive rates in the market!