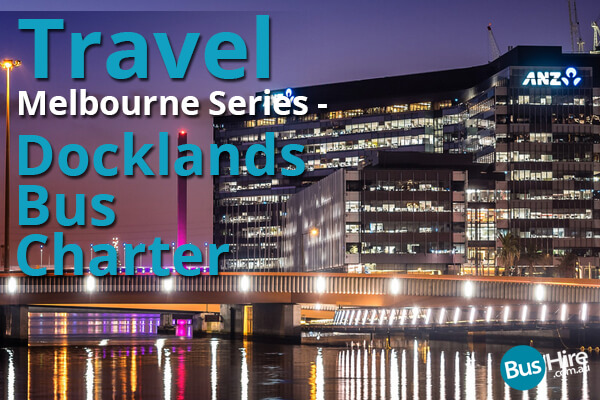 At BusHire.com.au, we lay emphasis on offering comfort and convenience to our customers with our Docklands bus charter service. If you are looking to explore the Docklands in Melbourne, you cannot find a better choice than our wide range of options, providing the most convenient way of commuting for all group sizes.

Melbourne Docklands is an inner suburban region towards the west of Melbourne that occupied the area next to the Melbourne CBD, consisting of water and land equalling 200 hectares. It is surrounded by the Charles Grimes Bridge and Wurundjeri Way towards the east, Lorimer Street towards the south and CityLink to the west. It is mostly a waterfront region on the reservoirs of Yarra River.

The suburb has become a favourite business address, attracting the offices of the National Foods, Myer, Bureau of Meterology, Medibank Private, ANZ, National Australia bank, as well as district headquarters for Bendigo Bank and Ericsson. One of the prime reasons behind the accomplishment of the Docklands office market is the ease of transport and proximity to the City Centre. It is also home to numerous water sports activities, including Dragon Boat racing. There are plenty of attractions around the town for you to check out!

View the city of Melbourne from a special perspective as you take a flight on the Melbourne Star Observation Wheel, while enjoying a glass of beer or wine. This is your visual introduction to the skyline of the city, from the 40-storey high structure. Soak up the panoramic 360 degree views of the attraction, from the You Yangs to the Dandenongs and Port Philip Bay to the Mornington Peninsula. Take an outstanding outlook across all dimensions. Relax in the Star Departure Lounge after or before you take the flight, and enjoy a glass of sparkling wine or a fabulous coffee.

The Melbourne Star is an engineering marvel, being the largest steel construction in the world. It echoes the 7 stars of the Australian flag, with its 7-pointed star design, forming an iconic feature of the skyline. You would simply love the LED light shows lighting up the star design every night, forming a kaleidoscope of colours.

This kid-friendly park is a popular spot for many events and activities, alongside the Harbour Town Shopping Centre. There is ample play space to keep your little ones engaged and entertained. There are usual swings, and a secluded area to sit, unwind and watch your kids play. There is sufficient green space in this awesome parkland, while other parts are sandy. Many teenagers love skateboarding down the slopes leading to the harbour.

You will find some beautiful sculpture here and a spacious basketball court right across the road. The park is extremely close to Collins and Bourke Streets. You are just a short walk away from a shopping centre and heaps of eateries at the Southern Cross Station.

From forensic evidence of the most tarnished crimes in Melbourne to the largest compilation of Kelly Gang armoury in Australia, the Victoria Police Museum has it all with a fascinating approach into the social account of crime and policing. Located in the World Trade Centre of Melbourne, the museum’s collection is centred on 3 elements; Crime, General Policing Equipment and Police Archives.

The wide assortment of items includes latest forensic technologies, the remnants of the car used in Russet St headquarters bombing, memorabilia relating to underworld figures lurking around the streets of Melbourne, weapons, police equipment, police uniforms and the huge collection of Kelly Gang armour. Some of the archival materials include original evidence and official documents from criminal cases, crime scene photographs and police service records dating from 1853.

The collection documents the history behind the police force of Victoria, and its contributions and impacts on the lives of people. It also provides an in-depth perspective of the broader political and social consequences of policing and crime, experiences of victims and police and the nature of crime.

Initially known as the National Ice Sports Centre at the time of its construction, the Icehouse Arena is home to the Olympic Winter Institute of Australia. It houses a specialist winter sports gym and a couple of Olympic sized ice rinks.  Rink 1, known as the ‘Henkie Rink’ features fully glassed board and stadium seating suitable for ice jockey. It was named after Geoffrey Henke AO, an Australian ice sports champion.

The other rink known as the Bradbuy rink was named after the Bradbury Family, and it is primarily used for public skating. Steven Bradbury, the well-known member of the family was a speedskater (short-track) who won a gold medal in a 1000m challenge at the winter Olympics in 2002. His brother Warren along with father John were also keenly involved in ice sports. The rink is also home to ice hockey teams of Victoria, competing in the Melbourne Mustangs, Melbourne Ice and the Australian Ice Hockey League. With a capacity of over 6500 people, some of the in-house facilities include Igloo Cafe, St Moritz Bar and a Pro-shop.

Take a unique guided kayaking tour of the Docklands to experience the spiritual heart and tranquillity of the city, as you explore it from the waterways and the Yarra River. Wind your way downstream into the city’s Birthplace, Docklands, as you soak up the fantastic views of the city skyline in one amazing sea kayaking experience. The city comes alive with the sun setting down, and there can be no better way to experience Melbourne.  Regular tours are conducted with the departure point at the Community Hub.

Are you planning a trip to Melbourne Docklands anytime soon, and concerned about the transportation part? Fret not, as Docklands bus hire is here to cater groups of all sizes, with first-class amenities and a licensed driver to take you through the town. We offer service at the most reasonable prices in the market, without compromising on your level of comfort.