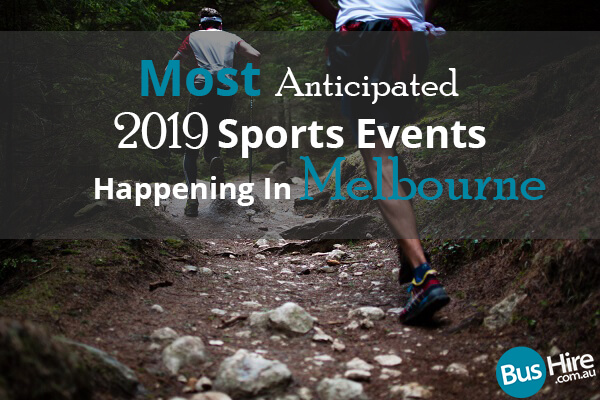 If you are visiting Melbourne for the first time, wouldn’t it be a good idea to hire a bus that can transport you, your family, and friends around the city? Using Melbourne bus hire assures that you will be able to enjoy the rest of your holiday without worrying much about how you can easily get from one place to another. You can use charter services to get to the most anticipated sports event that you wanted to catch. Here is a list of sporting events taking place in and around Melbourne.

MS Melbourne Cycle and Half Marathon 2019

This event is not the ordinary marathon or cycling event where you have to complete a certain task as instructed by the event organiser. With MS Melbourne Cycle and Half Marathon, you have the choice to run, jog, walk, or even ride a bicycle. As long as you have registered for the activity, what you want to do, you can do to your liking. As you enjoy the rest of the event, you also get to enjoy the magnificent sights and spectacular sounds of the rest of the Flemington Racecourse. This ride and run for a cause is held for the benefit of people with multiple sclerosis. Catch up on the activity which will be happening on Mach 31, 2019.

Transurban Run for the Kids 2019

An activity spearheaded by the Herald Sun, Transurban Run for the Kids is happening on April 7 to mark the 14th edition of the annual event. Since its inception in 2006, the event has already raised over $17 million dollars. It comes in two varieties: the short course that runs 5.2 kilometres; and the long course which spans 12.8 kilometres. The routes will start and finish at the Docklands Harbour Esplanade, with both courses passing by the Bolte Bridge. Enjoy the festivities as you walk, run, or cheer your companions who are participating in the event.

The largest car show ever to grace Melbourne, and the whole of Australia, Meguiar’s MotorEx is slated on March 11th to 12th for this year. This car show invites all car enthusiasts from all over the country and elsewhere in the world. It showcases the various modified and custom cars to present the owner’s individual style, while also pleasing the eyes of bystanders with a variety of colours on the rides. An experience that you should not miss, there will be over 700 vehicles coming in to join the fun.

The entire Marvel Stadium will surely be filled by basketball fans who are looking forward to one of the most awaited basketball tournaments of all times – the Australian Boomers up against USA Basketball team. Happening on August 22nd and 24th, 2019, this event is an important part of the Pre-FIBA World Cup Series. Promising to be the biggest sporting event ever to happen in Melbourne this year, every basketball fanatic will surely enjoy the show.

As locals and tourists leave winter behind and welcome spring in the air, everyone can expect a lot from one of those most anticipated sporting events to include in their social calendar. The Spring Racing Festival will open on August 31 at Caulfield’s Memsie Stakes and close on November 24 with the Ballarat Cup. This event showcases the greatest equine athletes from all over the world. Apart from this sporting activity, expect entertainment, fashion, and food colliding during these dates.

Filling the streets of Cranbourne on October 26 is no less than motorcycle riders who will make their motorcycles roar and make residents and tourists get a spectacular view of their rides. This will be hosted by the Victorian Motorcycle Council and the City of Casey, and is regarded as one of the largest and most exciting events to happen in Victoria for this year. Thousands of motorcycle riders will gather on the place and travel to Philip Island. This is part of the 2019 Australian Motorcycle Grand Prix. Entertainment awaits the entire family, with kid-friendly activities waiting for the young ones.

An event that gathers not just horse racing lovers but also those who are up for entertainment, food, wine, and fashion, the Flemington Racecourse will transform to a spectacular race and party ground from November 2nd to 9th. This activity which is open to Melbournians and visitors, will be the best place where families and fashionistas converge all in one place. Join in the fun, excitement, and exhilaration and get to witness four race days during the Melbourne Cup Festival.

Set to happen from November 8 to 10 at the Sandown Raceway in Springvale, Melbourne, Supercars will have its Retro Round at the Sandown 500. Witness plenty of race action from the best car racers of this generation. Open to V8 Supercar racers, this race will be taken to the track for the PIRTEK Enduro Cup’s final race. Experience and celebrate touring car heritage like no other with fashions, historic liveries, merchandise, and team uniforms seen on the Sandown Raceway. There is free Trackside admission for kids 12 and below, as long as they are accompanied by a paying adult.

Yet another sporting event taking place in November 2019, the Eureka Stair Climb will happen at Eureka Tower in Southbank, on the 17th of the said month. This fundraising event and community challenge is for the benefit of The Fred Hollows Foundation. Participants will have the climb of their lives as they conquer a total of 1,642 stairs up to the event’s level 88 at the Eureka Skydeck. Open to participants 12 years and above, the Stair Climb has various event categories for all ability levels.

An event taking place at Royal Melbourne Golf Club from December 9 to 15, this prestigious international team competition has been one of the most anticipated events for golfer wannabes and professionals golfers. Top players from all over the world, the finest golfers coming from Europe in particular, will compete against the best golfers from the United States. Enjoy the event as part of your Melbourne holiday!